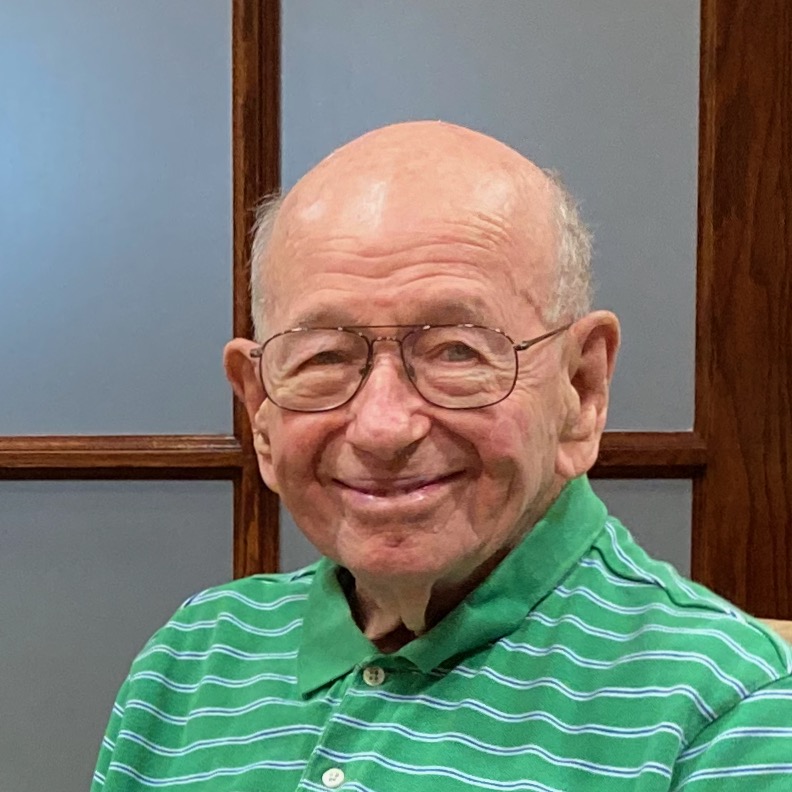 Louis O. Carr, 91, of West Lafayette died on Sunday, September 4. He was born on March 28, 1931, to Louis and Bernice (Gossett) Carr. Lou loved to say that, except for his four years at DePauw University and his two years in the army, he lived his whole life in West Lafayette.

After serving in the Counter Intelligence Corps, including eighteen months in Korea at the end of the war, Lou followed his father’s footsteps and became an insurance agent for Indianapolis Life. He earned his Chartered Life Underwriter (CLU) designation and founded his agency, Carr and Associates, which covered a thirteen-county area centered on Lafayette. Lou was in the insurance business for over fifty years; he served as president of the Indiana State Association of Life Underwriters and on national boards of the National Association of Life Underwriters.

Making art was a lifelong passion for Lou. He began painting at a young age and always said he spent more time performing in plays than studying in high school and college. Lou also enjoyed photography, building darkrooms during his time in the army and in his basement at home. He was an avid reader and participated in the Fortnightly Literary Club. Lou painted mostly watercolors for a while, and then in the last couple of decades of his life focused on pastels, which featured on his annual Christmas cards and grace the walls of Westminster Village and his family’s homes.

Lou met Margaret (Peggy) Spurrier in Baltimore when stationed there on his way to Korea; they married in 1955 and raised three children together, living for thirty years at 1200 North Grant Street across from his alma mater, West Lafayette High School. What he called their “42-year love affair” lasted until Peggy’s death in 1996. After that, Lou reconnected with Marge, whom he had dated in college, and they were married in 1997.

Lou will be remembered as an uproarious jokester who poked fun at himself and others, sometimes too loudly for his wife’s or children’s taste. Like his brother Harry, he never met a stranger. He loved sailing his little butterfly, the Peggy-Knot (because Peggy wouldn’t get in it), on Lake Freeman and Oliver Lake in Indiana and on Pamlico Sound behind the Outer Banks of North Carolina, one of his favorite vacation spots. He also enjoyed sailing on Chesapeake Bay and traveling in general. With Marge, he visited twenty countries in just over a decade.

Community service was important to Lou; he held leadership roles in Federated Church and many civic and business organizations in West Lafayette, including March of Dimes and Perry Chemical. In 1956, Lou was a founder of the Lafayette Breakfast Optimist Club, which named him Member Emeritus in 2021. For over twenty years, he served on the board of Wabash Valley Hospital Mental Health Center (now called Valley Oaks Health). Most recently, he served as a resident representative on Westminster Village’s board of directors for seven years. Westminster Village honored him with a Lifetime Service Award in April 2022.

Lou is preceded in death by his sister Priscilla (1984), his wife Margaret Spurrier Carr (1996), his son-in-law Scott Niemann (2004), his daughter Susan Margaret Carr (2012), and his brother Harry Carr (2022). He is survived by his wife Marge; his daughter Bonnie Niemann of West Lafayette; his son George (Susan) Carr of Oxnard, California; his step-daughters Diana Buser and Melora (David) Cox, both of Indianapolis; his granddaughters Michelle (Liz) Niemann of Indianapolis, Carol (Paul) Wittke of West Lafayette, and Emily Carr of Omaha, Nebraska; and his grandsons, David Niemann of West Lafayette and Zachary Carr of Sycamore, Illinois, as well as by three great-grandchildren.

Memorial contributions may be made to the Greater Indiana Chapter of the Alzheimer’s Association (https://www.alz.org/indiana) or to NICHES Land Trust (https://www.nicheslandtrust.org/). A celebration of Lou’s life will be held at Federated Church on Saturday, October 8, at 2 pm, with reception to follow. Share memories and condolences online at https://tippecanoememorygardens.com/obituaries-list/.