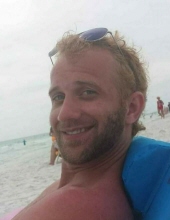 Steven Jacob Thomas, 32, of Nashville, TN passed away on January 16, 2021. He was born on January 26, 1988 to Angela Wright and Steven Robinson in Lafayette, IN. In 2009, he graduated from Holloway Highschool in Murfreesboro, TN. He then went on to attend The Paul Mitchell School.

From a young age, stepdad Bobby Hunter coached Jake in baseball. Bobby also instilled a love of nature-taking him canoeing, fishing, and allowing him to explore his passion for the outdoors. Being a creative individual, Jake also enjoyed cooking and gardening. His love for wrestling and sports were strongly encouraged by spending time with his brothers and stepfather. To know Jake is to love him.

Services will be held on Tuesday, January 26, 2021 at the Tippecanoe Memory Gardens Main Chapel with visitation from 11 AM to 1 PM with services starting at 1PM. Due to COVID restrictions, it is respectfully requested that those attending visitation make their visit brief.

TMG Funeral and Cremation Services is assisting with the arrangements.