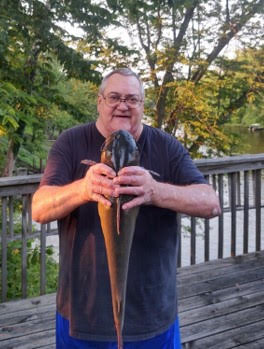 Michael “Mike” Scott Kemple was born to Betty “Jodie” Moore (Fathman) and Monroe “Roe” Kemple on October 2nd, 1959. He was born in Lafayette, Indiana. Mike died peacefully in his Monticello home that he shared with the late Monroe Kemple, on September 30th, 2021. Mike graduated from Benton Central High School. During his working career he did HVAC and helped with a microscope company. He also worked for a company called Eternal Energy installing solar panels all over the eastern United States. He was featured in a solar magazine for a large job he supervised in Florida. He enjoyed fishing, his motorcycles, traveling around the United States, and tinkering with things. He loved to talk about politics and history to anyone who would listen. Mike is survived by his daughter Heather Kincade and her three children, Kyeli, Jeremiah, and Aubrie, of Lafayette, Indiana. He is also survived by his brother Martin “Marty” (Connie) Kemple of Montmorenci, Indiana. He has many nieces and nephews as well as great nieces and nephews. Mike is preceded in death by his parents Jodie Fathman and Roe Kemple, as well as his brother Barry Kemple. Memorial services will be held at 11:00 a.m. on October 23rd, 2021. It will take place at Tippecanoe Memory Gardens