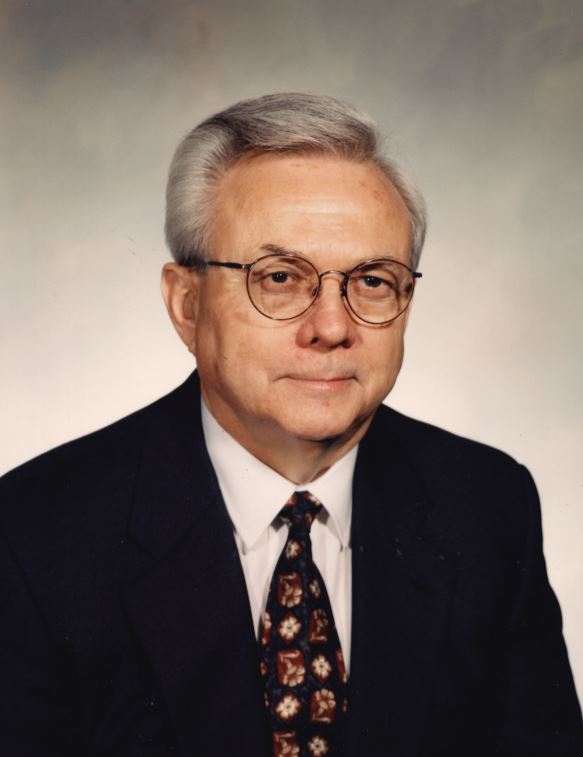 Howard Douglas Hensley, 90 years of age, passed away peacefully on December 13, 2021. Howard arrived in this world in a farm house near Paint Lick, Kentucky early on the morning of February 24, 1931. After enduring a very painful and life scarring surgery (a circumcision), he began his life in the shadows of the Great Depression followed by the very uncertain future surrounding World War II.
Howard’s parents, Bradley and Mary Bain, purchased the Kentland Motor Court in the summer of 1947 and moved the family to Kentland, Indiana, in September of that year. Howard attended A.J. Kent High School his junior and senior years, graduating in May 1949.During his summers he worked for Edward J. Funk & Sons in various management positions, such as mowing the Funk brothers’ yards, painting elevators, and loading trucks at night after the basketball season ended.
In the fall of 1949 he enrolled at Indiana State Teacher’s College in Terre Haute, Indiana (now Indiana State University), majoring in accounting. However in June 1951 he enlisted in the U.S. Air Force (Korean War) for four years. He married Connie Phillippi (A.J. Kent Class of 1950) in November of 1951 before shipping overseas. Howard was discharged from the Air Force in early 1955 and enrolled at Indiana University in Bloomington on the G.I. Bill continuing his studies in accounting and finance. He graduated with a BA Degree in 1956 and then attended I.U. another year to earn a MBA Degree. He joined Ernst & Ernst Accounting Firm (now Ernst & Young) in Indianapolis in August 1957 and borrowed $165,000 from Frank Phillippi (father-in-law) to pay for the move from Bloomington.
Howard served on the E&E Audit Staff for 1 ½ years, then receiving his CPA certificate, he was transferred into the E&E management consulting group, working mostly in the area of computer technology. In 1960 he left E&E to become controller of Fresh Pak Candy Company and it’s subsidiaries in Moline, Illinois. By this time Connie and Howard had parented three sons and lived in Bettendorf, Iowa, across the Mississippi River from Moline.
In 1963 Howard moved his family to West Lafayette, Indiana where he had accepted the position of Chief Financial Officer for Great Lakes Chemical Corporation, a New York Stock Exchange listed company. During the thirteen years with Great Lakes, he traveled extensively in the U.S. and overseas primarily on business.
In 1976, after resigning from Great Lakes Chemical, he bought a retail business in the greater Lafayette area and operated it for twelve years. In 1988 Howard sold the business and joined the firm now known as Salomon Smith Barney as a financial consultant where he retired from in 1999.

Howard is survived by his three sons, Richard Scott (Judi) Hensley on New Berlin, WI, Daniel Howard Hensley of Phoenix, AZ, and John Michael Hensley of St. Cloud, FL; eight grandchildren, Brandyn Hensley, Ashley Hensley, Danielle Hensley, Jonathan Hensley, Katee Hensley, Kaycee Hensley Port (wife of Chris Port), Cory Hensley, and Nicholas Hensley; and four great-grandchildren, Taylon Hensley, Ashton Hensley, Breah Hensley, and Owen Port.
Howard lost his mother in March 1987, his older brother, Brad, in February 1997 and his father in August 1997. His brother, Boyd, is a retired Air Force Colonel who passed away, and also a daughter-in-law, Kim Hensley.
Services for Howard will be held on Saturday, December 18, 2021, at 3:00 p.m. at Tippecanoe Memory Gardens Funeral Chapel, in West Lafayette, IN, with visitation from 2:00 p.m. until the time of service. Memorial contributions may be made in Howard’s memory to the Westminster Village Foundation. Online condolences can be left to the family at www.tippecanoememorygardens.com. Tippecanoe Funeral Home is honored to be assisting the family with the arrangements. The service will be available virtually at zoom.us, click the “join meeting” tab then enter the meeting number 765-490-4234 and the password:  tmg2020.