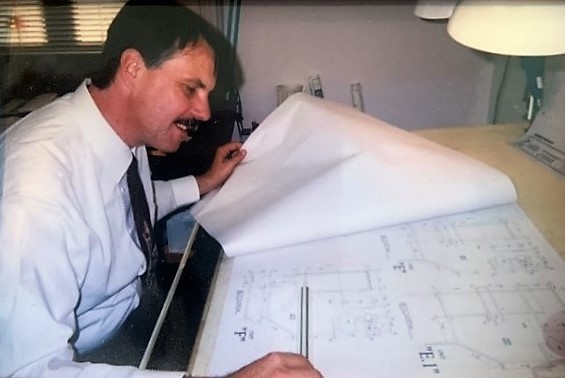 George Kurt Wahl was born in San Fransico, California in 1958 and passed away on November 25th in Lafayette, Indiana.  Kurt was the oldest of three siblings.  When his youngest brother was born in 1965, his family moved from California to Connecticut.  After living there 6 years, the family returned to California, settling in the town of Los Gatos.  After graduating high school, Kurt attended the University of Oregon where he received a degree in architecture.  He lived and worked in San Jose, California until 1992 when he moved to Lafayette, Indiana.  Kurt started an architecture firm in Lafayette in 1992 which was current until his death almost 30 years later. He was an active member of the Indiana Chapter of the American Institute of Architects. Kurt approached his profession and served his community in a quiet, thoughtful, and effective manner. Kurt served on the AIA Indiana Board of Directors and was the AIA Central Southern Indiana Chapter President in 2002. Kurt was a very good and conscientious architect and practitioner. Kurt was a strong believer in giving back to his community through his profession and volunteer work. Kurt made a distinct and positive impression on those he came in contact with. Kurt was passionate about historic architecture and its preservation. A gifted architect, Kurt lent his expertise to guide the Tippecanoe Arts Federation in their capital improvements and most recently, the full renovation of the Wells Community Cultural Center. He volunteered for over twenty years with TAF and was a vital part of the leadership that has placed the organization at the fore in the nation. Kurt was also an active member of the Lafayette Historic Preservation Commission since 2005 where he served multiple terms as president and was chair of the Certificate of Appropriateness Committee. He facilitated education seminars on the Secretary of Interior Standards for Rehabilitation for historic preservation commission members on both sides of the river and was instrumental in developing design guidelines for signs within local historic districts. Kurt also served as an advisor to the West Lafayette Historic Preservation Commission for several years. He loved animals and owned several cats over the course of his adult life.  He was also an avid golfer and enjoyed playing with his friends and family.  He is survived by his father, George Wahl, his sister Beth Dunaway, and his brother, Bret Wahl, 6 nephews and 2 nieces.  He was much beloved and will be greatly missed. He was a very smart, kind, and generous person.  He was quiet by nature but people who knew him loved him. A celebration of Kurt’s life and work will be held on Sunday, January 9th from 2-4 pm in the main gallery on the 2nd floor of the Tippecanoe Arts Federation in the Wells Community Cultural Center located at 638 North St, Lafayette, IN 47901. In lieu of flowers, donations to the Almost Home Humane Society or the Tippecanoe Arts Federation in Kurt’s name would be greatly appreciated.