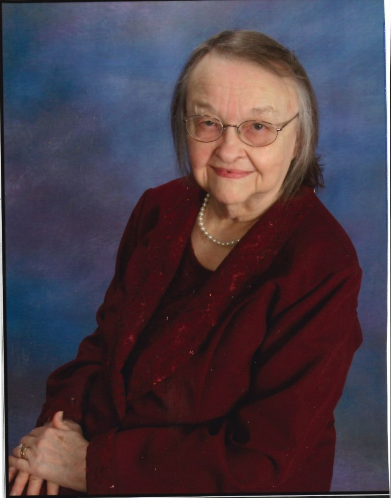 Elois was born in the family house on September 23, 1922 in Waverly, Iowa to Henry and Ena (Whitaker) Giesler. Because she was so tiny her parents put her in a cardboard box with cotton quilting batting as they did not expect her to survive. Not only did she survive, she thrived throughout her long life.

Elois graduated from Waverly High School in 1940 and from Wartburg College with a Bachelor’s degree in Education in 1949. While going to college Elois spent time working in the accounting department at the Coonradt Ford Dealership in Waverly Iowa which she really enjoyed. When she finished her shift at the Dealership she worked doing more accounting for a company that made sugar from sugar beets. On weekends she worked at the ticket booth of the local movie theater. She was proud to state that she paid her entire way through college because of her hard work.

After graduating from college, Elois married Harold Jacob Goerz on June 5,1949 at the Missouri Synod Lutheran Church in Artesion, Iowa.  They soon started a family and Elois became a stay at home mother. She used her skills of education, sewing, patching clothes, quilting and cooking to keep her four growing boys and husband happy. As her husband moved from job to job over the years the boys were deposited in different locations as each one went to college.

For 13 years Elois taught computer word processing and spreadsheet usage at Ancilla College in Donaldson Indiana. When she was not teaching a class she worked in the front office of Ancilla College. After her husband passed away in 1997 she moved to West Lafayette, Indiana to be closer to family.

Elois loved being with her family and enjoyed her neighbors very much. She loved to read, sew, work in her flower garden, paint by numbers and working on jigsaw puzzles. When she got the chance she loved to travel but when at home she loved her Pomeranian dog Pepper. In her later years as her eyesight failed she worked on jigsaw puzzles by feel and listened to audio books.

Elois was preceded in death by husband Harold, her parents and older sister Mary who died in infancy, her brother Lester who passed at age 14 of leukemia and her dogs Chelsea and Pepper.

The family wants to thank the loving neighbors, especially Mary Fran and Glenda, for the time and dedication spent with Elois. We also want to thank Alicia at Athletico, Angels Home Solution, Guardian Angel Hospice, as well as the numerous loving staff at Cumberland Pointe health campus for the care of Elois over the last few months.

Visitation on Friday February 21,2020 from 3:00pm-4:00pm with the Funeral at 4:00pm at Tippecanoe Memorial Gardens. Burial at Harlington Cemeterey, Waverly, Iowa