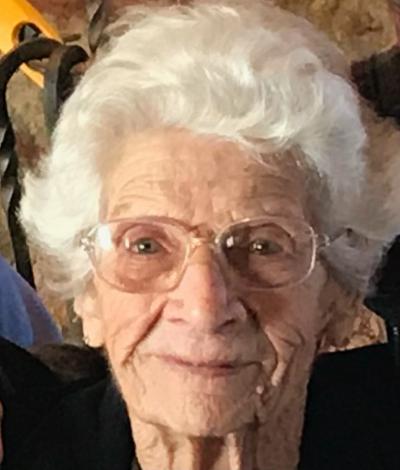 Eleanor F. Burton-Nesbitt was gifted her angel wings from “the man upstairs” on August 13, 2022. She passed peacefully surrounded by family at age 106. Eleanor had a heart of gold, was very compassionate and had a strong faith in God. Eleanor married Estel (Eck) in 1934 and had two children, Marilyn and Richard. She was a grocery store cashier and worked in the print shop in Oxford. In 2005, she moved to Tucson, AZ to be close to her grandchildren. Eleanor loved to read, pray, do search-and-find puzzles, play cards, garden and play with her great-great grandkids. Her grandchildren, great grandchildren and great great-grandchildren were the light of her life, and she enjoyed spending time with them. She will be missed greatly by many and remembered as the nicest lady. Eleanor was born on February 18th, 1916 in Lafayette, Indiana, to the late: Ernest and Katherine Rover. In addition to her parents, she was proceeded in death by her husbands, Estel Burton and Russell Nesbitt; brothers, William Rover, Edward Rover, Paul Rover and sister Kathrine Cronk.  She leaves behind her daughter Marilyn Wilson of Tucson, AZ and son Richard Burton of Oxford, IN; grandchildren include Bobbi Jo (Bill) DeCook and David (Gail) Wilson of Tucson, AZ; great-grandchildren include Kristina (Ryan) Blotkamp and Lisa (Paul) Schroeder; great-great-grandchild include Kaylee, Cole, Cason and Rylan. Her life was celebrated by family in Tucson, AZ, and she will be laid to rest at the Tippecanoe Memory Gardens in West Lafayette, IN. A graveside service will take place on Wednesday August 24, 2022 at 2pm.