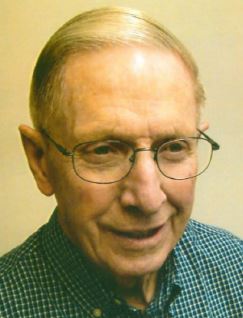 UPDATE: A memorial service for Eldon will be held at Trinity United Methodist Church in Lafayette on Saturday, April 10.  Visitation will be from 1:00-2:30, with funeral service starting promptly at 2:30 pm.  COVID restrictions will be in place as required.

Eldon was born in Tyrone, Oklahoma, the son of Henry Hood and Margaret Meyer.

He graduated from Eureka High School in 1941, and began his college experience at Oklahoma State University, enlisting in the Army in May of 1943. Eldon earned a Purple Heart after being wounded in the WWII European Theater, and was discharged in January 1946.

Eldon returned to OSU, earning his Bachelor and Master’s degrees in 1949. His first job was at the USDA Experimental Station in Mandan, North Dakota, where he met the love of his life, Mary Kathryn George. They were married in January 1953.

After marriage, Eldon worked on the family farm in Tyrone for several years. He then joined the Agronomy Department staff at Panhandle State in Goodwell, Oklahoma, where he worked from 1954-1957.

Eldon and his young family moved to West Lafayette in 1957 to pursue a doctorate degree in Agronomy at Purdue University. He was a teaching assistant during this period, and was awarded his PhD in 1964.

While at Purdue, Eldon was head of the Soil Testing Lab, taught various courses in the Agronomy curriculum, and coached the Crops Judging Team. He was also the faculty sponsor of the Purdue Archery Team, and a Faculty Fellow at Dumhe Hall. He thoroughly enjoyed his interactions with the students, many of which continued to stay in contact after their graduation.

A long time member of Trinity United Methodist Church, Eldon served as president of the Lamplighters class. He was also a member of the Sagamore Lions Club for almost 60 years, where he held various offices, including President. Eldon received a W.P. Fellowship Award, the highest award of the Indiana Lions Foundation, on behalf of Lions community outreach, health and welfare programs.

Eldon volunteered as a Red Coat at the former Home Hospital in Lafayette.

Eldon and Mary moved to Westminster in November, 2008. He soon became known for his “love” of ice cream, his “Pepsi Cola Song”and sense of humor.

He is survived by his wife of 67 years, his family, a brother, Joe Hood, and numerous nieces and nephews.