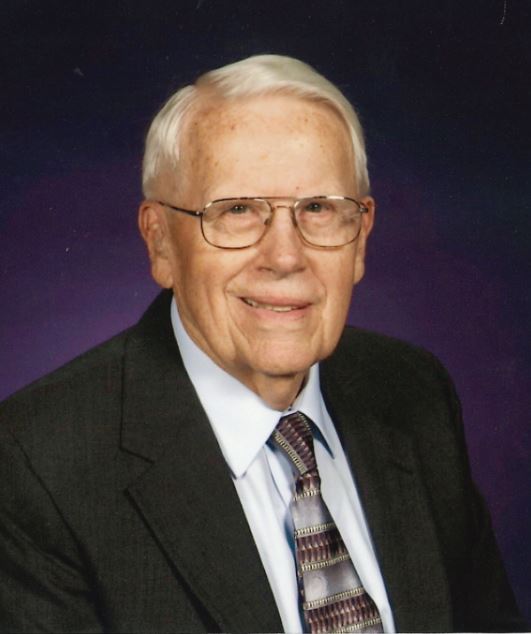 Charles C. McKee, 95, passed away on Nov. 27 in West Lafayette.  His professional career was marked by a lifelong service to soil and conservation management in Indiana.

Charles was born on April 18, 1926 to Wallace and Mae McKee in Telford, TN.  In 1943, the family relocated to a farm near Philadelphia, TN, where Charles graduated from Washington College Academy.

Following a stint in the U.S. Navy during World War II, Charles attended East Tennessee State (Johnson City), then transferred to the main campus of University of Tennessee (Knoxville), earning his Bachelor’s of Science degree in 1950.

Upon graduation, Charles moved to Gibson County, IN to teach vocational agriculture.  It was there that he met Norma Schurmeier, the older sister of one of his students.  The couple moved to Princeton, IN and then to Petersburg, IN where Charles worked for the U.S. Soil Conservation Service.

In 1955, the McKees relocated to West Lafayette and Purdue University.  Charles was employed initially as a soil conservationist with the Cooperative Extension Service.  He next served as Executive Secretary of the State Soil & Water Conservation Committee until 1987.  Charles also was named chief of a newly-created Division of Soil Conservation at the Indiana Department of Natural Resources, which he held until his retirement.

Preceded in death by his wife Norma and daughter Diane, Charles is survived by son Gary (April) of Rossville, six grandchildren, three great-grandchildren, and sisters Mary Ruth Bowery and Francis Miller, both of Kingsport, TN.  Charles enjoyed sporting events and traveling with Norma in their motor home.  He was a long-time member of the West Lafayette First United Methodist Church.

A memorial service will be held at Tippecanoe Memory Gardens in West Lafayette at a later time to be announced in Spring 2022.