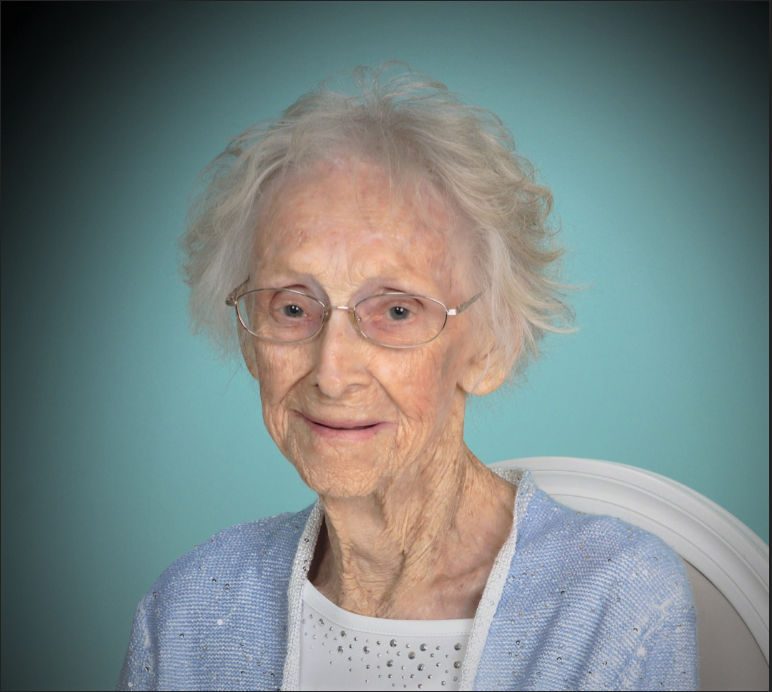 Memorials should be made to American Diabetes Association or The Leukemia & Lymphoma Society. Envelopes will be available at the service.

Edna Mae Odle Leslie
Edna Mae Odle Leslie, 97 years young, went Home to be with her beloved husband, William Daniel Leslie on Saturday, Dec. 14, 2019 at 7:34 p.m. at IU Hospital Lafayette, after a serious fall. She had been a resident of Aster Place in Lafayette for 6 weeks and lived at Glasswater Creek of Lafayette prior to that.
Edna was born July 23, 1922 in Williamsport, IN to Ruth Ann McFarren and Chester C. Odle. Edna had four sisters, Ruby McKinzie (Clark, both deceased), Norma Gurley (Richard, both deceased), Esther Jarrard (Fred- deceased, of Lafayette), and Naomi Gibbons (Stan- deceased, of Danville, IN) and a brother, Richard Odle (Betty-deceased, of Goodyear, AZ). She resided in Lafayette for most of her life.
She married William, on January 17, 1947 in Lafayette, IN and that marriage lasted 39 years until his death. William passed away on August 19, 1986. They were blessed with three daughters (all of Lafayette), Carolyn S. Odle Weedon (Donald), Pamela A. Rounder, and Patricia J. Leslie Smith (Ronald). Pamela went to prepare a place for her mother in March of 2012. Edna enjoyed traveling with her daughters to Arizona, Florida, Tennessee and Sandusky, Ohio.
Edna was a Seed Analyst for the Indiana State Lab in the Biochemistry Department of Purdue University for over 20 years. She was especially proud to have prepared seeds for the NASA Challenger Space Shuttle Program. She returned 5 times after retiring to work part time.
She LOVED spending time with all her family including seven grandchildren, Debra Randall (Jeffery, of Phoenix, AZ), Jeffery Weedon (deceased), Deidre Chitty (Alvin, of West Point, IN), Dan Norman (Lori, of Matthews, NC), Traci Davis (Ryan, of Tracy, CA) and Wendi Couch (of Brownsburg, IN). She enjoyed teaching her grandkids how to play card games, Yahtzee and Nerf Basketball in her dining room. One granddaughter, Leslie Ann Norman preceded her in death.
She was also blessed with twelve Great Grandchildren, Nick Washington (Jennifer), Nathaniel Chitty (Annie), Ethan Chitty (Kristen), Alena Chitty, Ashley Morris (Joe), Desmond Weedon, Paige Cu, Gordi Abraham, and Wyatt and Kimber Davis, Jarrett and Jacelyn Norman of Matthew’s, N.C. One great grandchild, Kaytlynne Chitty preceded her in death. She was also the proud Great Great Grandmother to four step-grandchildren, Lexi McIver, Jayden McIver, Anthony Cu and Ava Cu and one Great Great grandchild, Bellah Chitty who she was excited to see any chance she could.
She was beloved by several nieces and nephews and great nieces and nephews. They also enjoyed spending time with “Aunt Edna”. She also enjoyed visiting extended cousins and family every August in Williamsport at the Odle Reunion.
Edna or “Granny Grunt” as the grandkids lovingly called her enjoyed her stories of growing up during the depression, playing card games and Yahtzee where she taught them the golden rule of “you only cheat if you have to” which proceeded a bonus roll. She was an avid golfer, bowler and enjoyed doing candle wicking and embroidery. She was also known for her ham salad, potato salad and fried chicken, which was requested several times for Sunday dinner. She was an inactive member of the Beta Chapter of Kappa Kappa Sigma Sorority.
Her celebration of life will be on Saturday, December 21, 2019 at 10:30 a.m. with a visitation one hour prior to the service. It will take place at her home church of First Christian Church, 329 N. Sixth St, Lafayette, IN. Rev. Andrew Gutherie will preside. Following the service, she will be laid to rest beside her husband at Tippecanoe Memory Gardens. Memorials should be made to American Diabetes Association or The Leukemia & Lymphoma Society. Envelopes will be available at the service.

Her celebration of life will be on Saturday, December 21, 2019 at 10:30 a.m. with a visitation one hour prior to the service.  It will take place at her home church of First Christian Church, 329 N. Sixth St, Lafayette, IN.  Rev. Andrew Gutherie will preside.